Climbing Cannon with the Frat Boys 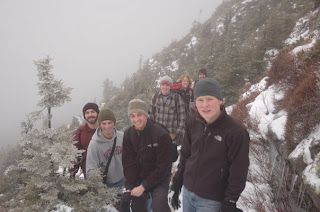 In January of 2007, Ethan and a bunch of his fraternity brothers rented a condominium in Franconia Notch so that they could ski at Cannon Mountain.  This was their senior year and they were ready for a skiing vacation before heading back for their last semester.  Unfortunately, the weather gods did not cooperate and the snow conditions were abysmal for skiing so Ethan suggested calling his mom who could bring some winter hiking gear over and then we could all climb Cannon.  Yes, I think that I might be the only mother ever invited on a fraternity outing. 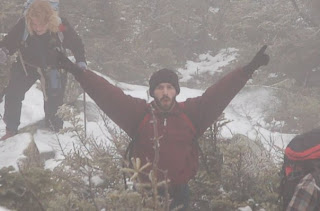 I brought along thermoses of hot tea and hot jello, crampons and snow shoes and microspikes and everything else that I could come up with and headed over to meet them at the trail head.

The weather most of the way up was misty and the ground conditions were snow and ice.  I climbed fearlessly knowing that there were a dozen strong young men to carry me down if I broke my leg. 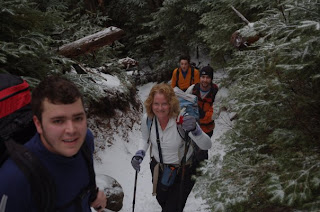 I have thick hair and lots of it and hats just aren't that comfortable for me.  So, in the winter I usually hike with as little on my head as possible. That day, my hair was getting pretty damp from the mist but I didn't think too much about it on the way up while my body was warm from exertion.  I should add that I was much more of a novice winter hiker than I am now and in no way endorse my winter hiking methods of 2007--do not try this at home, kids. 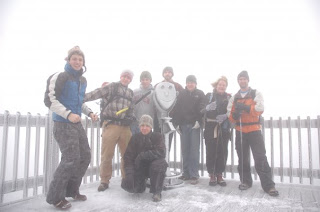 So, we climbed through the mist and slipped and slid our way up the mountain.  Some of the boys hiked in jeans, some in sneakers, some in ski boots--we were a motley crew but having the best time.  As we reached the summit suddenly it wasn't warm any more and there was a frigid wind and things started to freeze fast--including my hair.

The way I remember it, someone snapped a picture in a hurry and we all ran as fast as we could into the trees and drank tea and hot jello and put on whatever clothes were still dry in our backpacks and laughed and slid our way down the mountain and into the part of my brain labeled favorite memories.

Thanks Ross, from whose facebook photo album I stole these pictures.  I'll treasure this forever.
Posted by Beth at 7:26 PM

great story Beth, thanks for sharing it -- nice lead in to the soon to be winter weather. Was great the guys all grabbed on to another outdoor activity vs packing it in (no pun intended) because skiing was bad.
-Deb

OK, can I just say that you are the most fearless mom I have ever come across? I am sure this will be etched in their memories for a lifetime as well! GO BETH!

Oh my goodness, the hot treats and dry clothes and slipping down the trail, gave me such a chuckle. There is a special kind of young energy in this story that I love. Fearless and fun because its all new and there's not wisdom to add caution but the safety gods make it all okay. Love, love this story. It's youth and its so alive!

So glad to see you blogging again, I've missed your stories! I love this story it sounds crazy fun. I bet the boys will never forget it either. Welcome back

Hi, My name is

Beth
and I live in a small town in the mountains of western Maine. My stories are about all that is around me--family and nature and mountains and hiking and books and food and anything else that catches my fancy. Welcome.