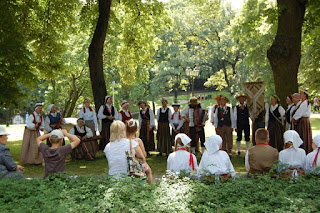 In 2013 Charlie and I went to the National Song and Dance Festival in Riga, Latvia.

The festival, which is held every five years, has a rich history starting in the early 19th Century and continuing through many decades of occupation and political upheaval including the Soviet Occupation of 1944 to 1991.  The movie The Singing Revolution memorializes the effect of a similar festival in strengthening and consolidating national fervor and accelerating the end of the Soviet Occupation in neighboring Estonia.

Our 2013 experience at the festival did not just enrich our lives but has affected our conversation and relationship since then.  I doubt that a week has gone by since then when we have not discussed the event and anticipated the return trip in 2018.  I often fall asleep listening to Dod, Dievini.  My CD player often has Auli in it which can be quite startling to people who innocently climb into my passenger seat and hear bagpipes at full volume coming from the speakers.  As Charlie writes or does research his sound track is often Laplesis.  A rock opera so moving, that even though we could not understand a word, we had tears rolling down our cheeks. 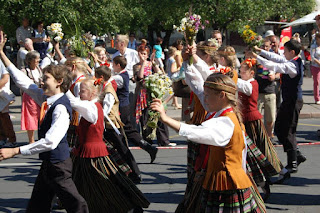 Yesterday tickets went on sale for the 2018 festival.  The sale began at 11 a.m. Eastern European Time and, judging by Twitter and Facebook, we were not the only Americans up in the wee hours of the morning trying to buy tickets.

It took close to 8 hours in an on-line queue but we managed to get tickets to two events.  We were hoping for more, but there was definitely more competition for tickets in 2018 than there was in 2013.  That year, Charlie just woke up early, easily logged in, and purchased tickets for all the events.  No matter how many ticketed events we can attend, the music and the dance are in the air and in the street and we will have a wonderful time in this little country that looks like a fairy tale, but is and, always has been, in such peril.

I remember reading about that trip and how much it meant to you all! So happy to hear you will return this year to soak in more of the joy!

Thank you, Jayne. I wish that I could bring you with me--the music and the beauty are all things that you would enjoy.

Enjoy springtime in Georgia, we are looking for a huge snowstorm this week.

Hi, My name is

Beth
and I live in a small town in the mountains of western Maine. My stories are about all that is around me--family and nature and mountains and hiking and books and food and anything else that catches my fancy. Welcome.